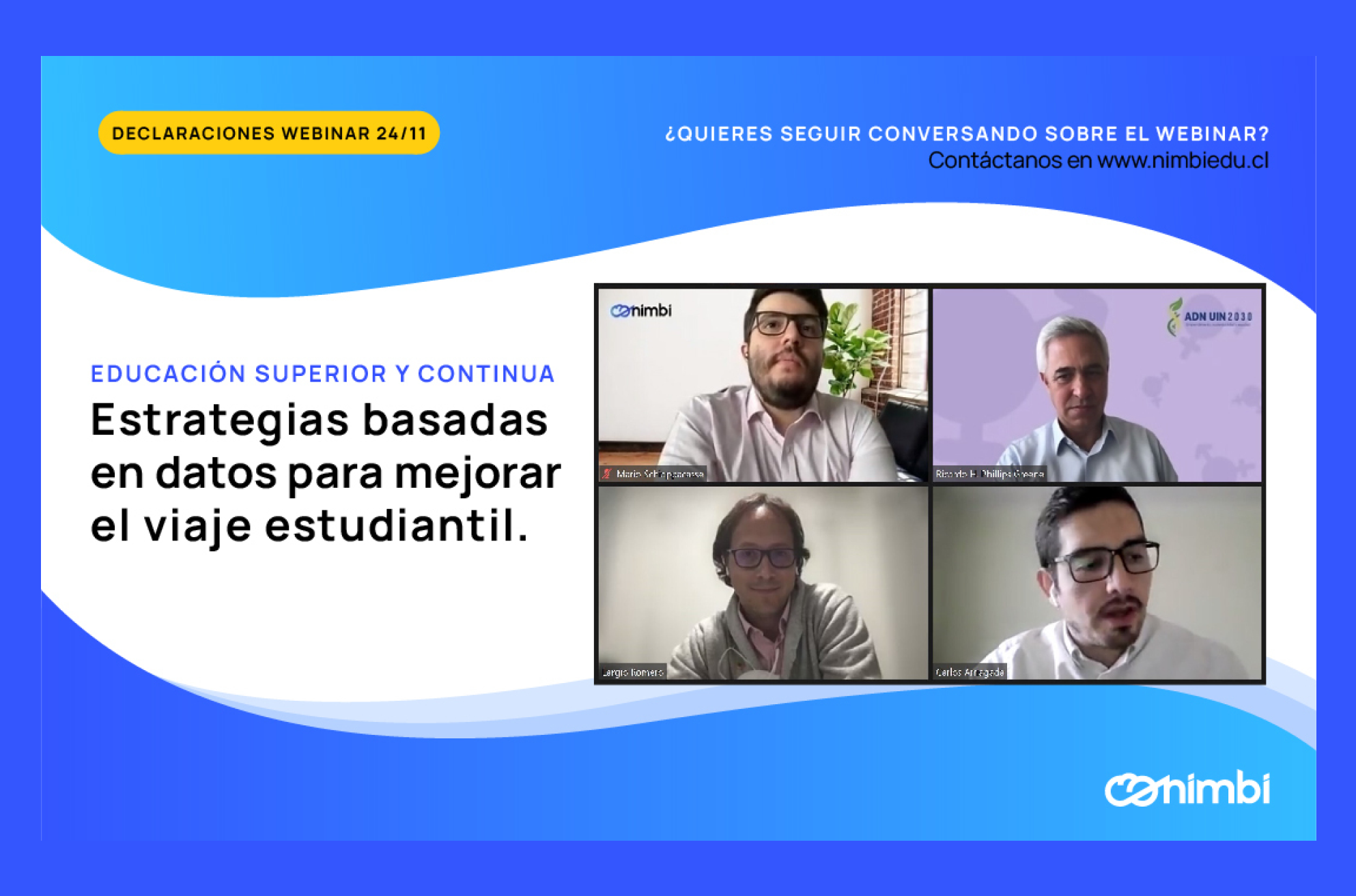 Nimbi’s second webinar “Strategies based on data to improve students’ journey” took place on November 24. This blog post is the first part of the most relevant remarks made by the panelists on the fast-paced digitalization of Higher and Lifelong Education in Latin America as a result of the pandemic. Check out the blog to watch the video recording with the most relevant remarks.

Nimbi’s second webinar “Strategies based on data to improve students’ journey” took place on November 24. This blog post is a summary of the most relevant remarks made by national and international experts on the fast-paced digitalization of Higher and Lifelong Education in Latin America as a result of the pandemic.

Click here to watch the video recording with the most relevant remarks.

We owe our students

The discussion started with Ricardo H. Phillips Greene, Operating Partner at Linzor Capital & CEO of the Universidad Insurgentes (Mexico), who defined himself as a person who “strongly believes in low-cost quality models. In our University we work with the hypothesis of reducing costs while improving quality and this is accomplished through certifications and employability programs.” He also said that post-pandemic students have not changed. They are still the same. However, their behavior patterns did change. If you, as university, “don’t understand them, you will be out of the market. If you don’t have segmentation data, you can’t break down those segments of students who behave differently and have different needs.”

He added that the advent of Edtech companies has significantly changed the speed of the market. In this context, he believes this is a welcome change: “Universities with departments of technology have realized that their expertise is not the development of technology. There are no more huge departments of developers trying to create their own platforms; they are trying to figure out how to integrate suppliers into their ecosystems to keep up with the speed of the market. It was a terrible shock. The most institutional universities are adapting quickly and they will win because either you keep up with Edtech companies (by establishing partnerships) or you fall behind. Students don’t forgive.”
Largio Romero, VP Strategy and Technology at eClass, who is an expert in online or distance learning and has worked with technology applied to different business models for more than 20 years, pointed out that education is particularly relevant in a world where change is the only constant. Later, when he discussed the digitalization process of Higher Education, he mentioned that it had developed very slowly prior to the pandemic and accelerated rapidly thereafter: “some institutions have adapted quickly, while others have not.” In this process, several universities lost sight of their students since they were not in their classrooms, so they didn’t have a chance to monitor them (their motivations, level of knowledge, etc.) in person. He asserted that after a general digital transformation process we owe our students: “contents and teachers have been digitalized, but the biggest challenge is supporting students and getting the necessary data to improve student support.”

He also added that it is essential to design a support system that is “tailored-made and based on students’ studying patterns, though this is only possible if we have extensive data.”

A cultural change in the team

Carlos Arriagada, National Director of Academic Progression at Instituto Profesional AIEP, pointed out that his passion for Technical Professional Education in Higher Education started 13 years ago. Today his challenge in AIEP is being the Head of the new Academic Progression department. Arriagada agreed with Romero’s views on the fast-paced digitalization caused by the lockdown and talked about the segment of students who were not prepared for it (due to connectivity issues or the number of people connected simultaneously in a house) and the challenges we have faced as a result of the gaps caused by this lockdown.

The good news is we are emerging from the worst of the pandemic and we are returning to face-to-face classes, and this is the solution to a major problem because “most technical professional institutions have significant face-to-face activities since 80% are practical.” He added that there has been significant technical improvement in infrastructure but there is a cultural gap that we still have to close, although some institutions, including the one where he works, are already working with “telepresence instruction or synchronous teaching, and asynchronous formats in which students watch the classes.”

Later, Arriagada mentioned a further cultural challenge regarding teams responsible for triggering the results of the models. He pointed out that the accuracy of predictive models nowadays is very high; however, in his experience, their deployment is sometimes inaccurate. Furthermore, when teams responsible for triggering results gather, it is necessary to explain to them simply how to deliver reliable data. “To make the model reliable and credible to university teams responsible for triggering results, the language level must be lowered so that everybody understands what to do with that information.” Later he mentions this also implies a cultural change because there is a level of resistance in universities that have been operating with rudimentary tools such as Excel since they think that by using these tools, they obtain better results than the ones obtained with the models. “It’s a cultural challenge for us to see how we make people who are unfamiliar with this technology understand how a team benefits from data management.”

The Netflix of courses

Mario Schiappacasse, Chief Data Scientist at Nimbi, started the discussion by explaining that “Nimbi is a platform with a tool suite for Higher and Lifelong Education institutions to monitor and automate tasks while managing students through different channels to improve their engagement, retention, and academic experience.”

Later, he shared his vision of the new data applications in Higher and Lifelong Education in Latin America. First, he mentioned there is a new technological world where students are increasingly immersed in online platforms, LMS, etc., “which gives us a record of where they have been and what they have done.” He said that many universities “already have or want to incorporate early alert systems to warn any decision-maker about a student who is in a specific high-risk category or is likely to change school.”

In Lifelong Education there are also “initiatives to look for a match between students and courses they would be interested in or they would like to do according to their academic stage. Something like the Netflix of courses.” Furthermore, Learning Analytics are being used to check if students are interacting with the courses as expected. We could be able to determine, for instance, “if we need to adjust the curricula or change content to allow them to interact as planned and, if not, look for tools to change it.” As well, he emphasized the need to visualize how courses evolve over time or to determine if they have become obsolete.

Finally, and in keeping with Romero’s view of the importance of knowing students deeply, he pointed out that more and more tools are profiling students individually as well as in groups and integrating all sociodemographic and academic data. Besides, he said there are “new variables, such as resilience to face a difficult situation, or students’ engagement with education.”

In the next recap or part II, we will talk about “Integration of variables and fairness”. Until then, you can contact us to discuss data and technology in Higher and Lifelong Education here.

How can you leverage your retention strategy with Nimbi?

Request a demo with the Sales team and we will contact you asap.